Why choose Lanzarote for your winter sun holiday? 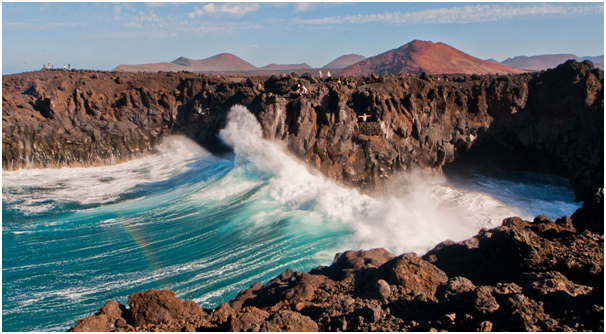 You can go to the Canaries at any time of the year and good weather is guaranteed more or less. Sure, it is sometimes windy, and the odd storm is not completely unknown, but you can mostly expect sunshine and average temperatures of approx 22C. Even when the islands are at their hottest point, in July and August, temperatures are usually only in the mid-twenties Celsius. Every time you go, it’s almost always warm enough to swim and sunbathe. 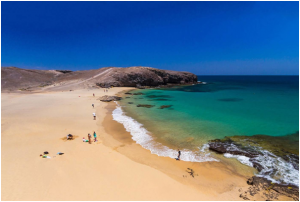 Lanzarote has some spectacular volcanic landscapes, including the Timanfaya National Park, which has a terrain like a moon and is one of the main reasons the island was declared a Unesco Biosphere Reserve in 1993. It has also been used as a training ground for NASA’s Apollo 17 crew.

About 360 volcanic cones emerge from granular black sand in the national park. The focal point of the vast black landscape is the Islote de Hilario volcano. Because of the fragility of the rocks, you cannot walk around without a guide. A bus takes visitors around the park to see incredible striated rock formations.

Lanzarote has been spared the worst over-development especially because it has banned the construction of high-rise hotels and billboard displays. One of the only high-rise buildings is the Arrecife Grand Hotel, which was built before the ban was imposed. While there is a large amount of construction, dwellings in Lanzarote maintain a minimalist simplicity, externally, only painted white, green and blue.

This might surprise you, but Lanzarote is becoming more upmarket. However, don’t expect anything too fancy or flashy; this quiet revolution is about living in neat and environmentally friendly places. Although there are very good family hotels, for example in Playa Blanca and Puerto del Carmen, far from the resort there are also various simple places to stay. Choose from chic boutique hotels, bungalows or traditional holiday apartments. You can also find country houses or even sumptuous yurts. Travel to Lanzarote with Irish Airports like https://irelandwestairport.com/

The island is becoming increasingly famous for holiday activities, especially surfing, windsurfing, surfboards, and paddleboards – as well as cycling and hiking.

Tours stop at La Geria’s black ash vineyards, which stretch to the east of Timanfaya National Park. The El Grifo winery is one of the island’s oldest wineries, where a mixture of mostly dry white and sweet dessert wine has been produced since 1775, including an interesting collection of antique barrels, wine suppressors, and distillery equipment. Stratvs, one of its newest wineries, is a sparkling creation carved into a rolling hillside. Visitors can visit sophisticated production facilities before settling in a shady courtyard area with tapas and a glass of white malvasia.

From remote bays on the northeast coast that are rarely visited, such as Charco del Palo to golden sand with calm waters to those with perfect waves for surfing, you are spoiled for choice on the island’s beaches. Lanzarote emerges from the sea as a result of volcanic activity, but only a few of its beaches have black sand.

With short flight times from the UK, guaranteed warmth and a relaxed Mediterranean atmosphere for children, Lanzarote is the ideal choice for families with young children. This modest resort in Playa Blanca on the southern tip of the island is perfect for families, with beaches stretching out of golden sand and views across the Atlantic to Isla de Lobos and Fuerteventura.